As I land in Medellín after the quick 45 minute journey from Bogotá my hangover of the year seems to be passing. Thank you Latam Airways for changing my seat to an exit seat at the gate.

There are two options to make the 45 minute journey from the airport to Medellín. The bus is 14,000cop / £3.70 and as expected had everyman and his wife, child and donkey are waiting in the queue; or a white airport taxi that is 75,000cop £19 with no queue.

Hangover not completely averted and the thought of the Hotel pool, I go for the taxi. Forty five minutes of pure hell, holding down the vomit with each turn and bend as we go up one side and down the other side of a mountain.

I finally arrive at my last attempt of luxury and check into the Dann Carlton Belfort 5 star. It would seem the higher the star, the lesser the trust. I paid for my 2 nights in full at check in and made it to my room, with a massive bed and a shower big enough for the Colombian football team I was happy.

Unfortunately this 5 star establishment doesn’t permit guests of guests unless details and passport documents are taken. So no football team for me. Instead I get room service, watch some columbian tv and crash. Obviously I checked out the local talent too 😜 via my orange local guide app.

It’s my first full day in Medellín and im excited about seeing the city, I had arranged to meet Olivia and Luke who were friends of friends from London at the museum of Modern Art.

Feeling a bit museum fatigued I decline to join them inside, so we caught up in the local park, where to my delight I am informed that all parks in Medellín have free wifi.  I wonder off and head into Poblado the epi centre for tourists and familiar myself with the surroundings. Already I am getting a completely different vibe to Bogotá, and I like it,  I like it a lot.

Evening arrives and I meet up with Olivia and Luke for food and drinks fresh from their kickstarter video, they fill me in on there fact finding mission about the Colombian narcos trade and the effects on the local community. The stuff you don’t hear on the walking tours.

Hearts and red balloons are everywhere, it turns out it’s Valentine’s Day, but Colombians are inclusive, in tell me its for friendship as well as love. The Bars and Restaurants around Parque lleras are packed with tourists and locals, you can feel the energy.  After dinner the guys decide to call it a night, but after quite a few margaritas I have the party spirit in me.

Sitting alone in a bar taking cover from the monsoon like rain pouring down outside, I check on my local guide app. Before I know it the guy on the next table has messaged me, so I message back. Turns out he can’t speak English and my Spanish was still to rocky to enter in conversation, so we translate using google.

I join him and his mates and go to the club upstairs for a dance. I meet a couple from New York and their friends and we dance and drink and dance and drink. Not content with our fill, we demand more from our local friends. Where to next we ask.

Six of us pile into the smallest taxi and head over the river to a bar/restaurant that was packed to the rafters (I cant remeber its name). A bottle of rum later (I hate rum) and few more hours of dancing I’m feeling woosey, and make my way back to the hotel at 8:30am. Suffice to say the next day was spent by the pool writing last weeks update.

Monday comes and so to does my first day at Spanish school, having decided to do three weeks of school while in Medellín. My poor tutor Julio, I think he thought he was getting someone far more advanced.

It turns out the online tutorials of daily Duolingo hasn’t made me 30% fluent the lying son of a… but I’m determined and ready to learn. The El Dorado Spanish School in Envigado is great and at a great price. One on one, 3 hours a day, 4 days a week 320,000cop / £80.

By Thursday my brain is well and truly fried from all the new information and my frustration was getting the better of me. I needed some fun.

Through the free walking tour  of Medellín, which I might add is well worth doing to get to know your way around the city. You see first hand the struggles of the past and understand the amazing journey, from the most violent city in the world to the city it is today, open to anyone. 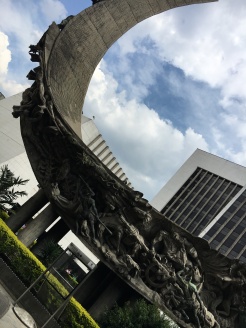 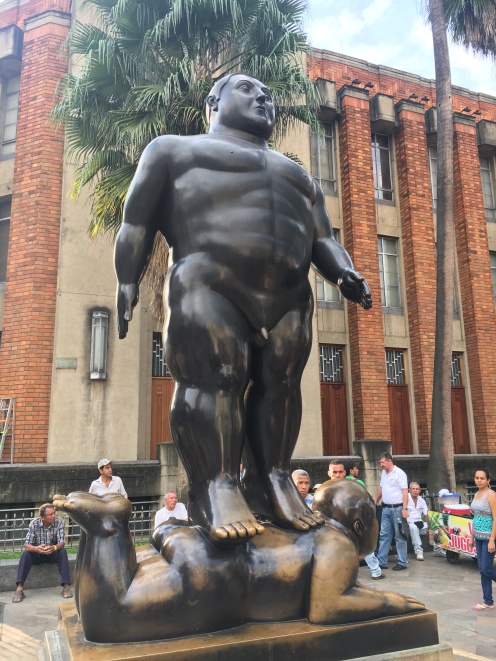 As you may have noticed when on organised tours I tend to get talking to people and make them my new traveling buddies. This tour was no different and my new buddies and I decided to go to a salsa club. For those of you that know me, you know I love to dance 💃.

Son Havana was perfect, full of locals dancing salsa to a live salsa band. Sylvia my new Dutch friend showed me the main salsa steps and before I knew it my hips and legs were moving in time. I loved it and can’t wait to do it again.

Talk of paragliding the previous night turned into seven of us actually heading up to the top of Medellín, strapping up and taking the plunge. I can honestly say I have never been so at peace, being 3500m in the air, with birds flying below and no sound other than the wind whistling past your ears, an truly amazing experience. I can see why the instructor is happy to make 36 trips in one day. It is an experience not to be missed. 145,000cop £36 or 165,000 cop £45 with an SD card for videos. We used Zona de Vuelo, but there are a few outfits that can be used that take off form the same place. 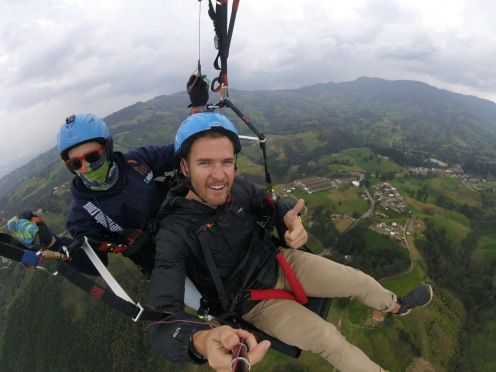 DCIM955GOPRO
Saturday like for so many in the world is a day for football, and no where more so than in Colombia are they mad for it. Me on the other hand, only ever watches England play in the Euro or World cups and thats normally only a maximum of four games, as they tend to get knocked out by some other country quite early on.

Fast forward and it’s 4pm in the stadium, I’m wearing my newly purchased Medelliín home shirt (my first ever), standing on the seats with 20 or so other foreign travellers and 16,000 Medellín supporters. 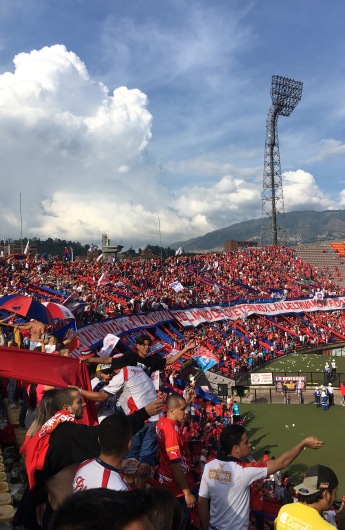 The atmosphere and passion was electric, with their own brass band in the terrace and 16,000 fans singing chants at the tops of their voices, jumping up and down on their seats, it was like nothing else I had witnessed before. Within 10 minutes a spectator was stretched off by an ambulance crew, due to falling from the upper terrace from too much excitement.

The Medellín fans put a lot of time into creating the chants, a shame the players didn’t spend as much time on their game. They just didn’t know how run forward or kick into the box. When the away team scored, there was and eerie silence, as only home team fans can spectate in Colombia. So after the second goal scored by the away team, the chanting and stamping got louder and finally Medellín scored with 6 minutes to full time. Sadly not enough to win.

One thing I have learnt about Colombians and especially Paisan´s, is that they are full of optimism and will celebrate the smallest of wins, especially in the hardest of times. This mentality has certainly proved to serve Medellín very well.

Its Saturday night and I have been invited to a BBQ by the friends of one of my local guides Kevin. We turn up to what can only be described as one of the best penthouse apartments ever. It’s has everything, the view, the cinema , the jacuzzi; oh and racing pigeons.

As always I was made so welcome by the hosts and all their friends, it’s just the Colombian way. I think the giant bottle of aguardiente certainly helped.

This site uses Akismet to reduce spam. Learn how your comment data is processed.